Join us on Friday, June 5 or Saturday, June 6, 2020 for a night that will bring back memories of sock hops and soda shops featuring The Chantels, Kid Kyle, and Pure Gold. Let's turn back the clock for a night of dinner and dancing and Doo Wop classics! 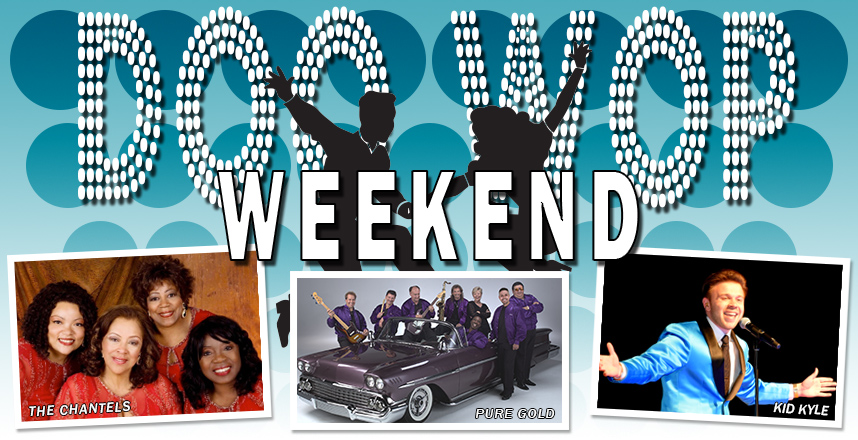 Tickets to both Doo Wop Shows, dinner, dancing and two nights of lodging when you stay on the Doo Wop Weekend Package!

Starting at price is per person, based on double occupancy

All attendees must be ages 21 and up. Proper identification will be required at the entrance to the show. Hotel rates are per person, based on double occupancy. Price is subject to change and availability. Advanced reservations are required. Package cannot be combined with any additional discounts, coupons offer or contracted rate. Restrictions apply. Rate does not include applicable taxes or gratuities. Additional fees apply if more that two people are sharing a room.

With signature acappella vocals and four-part harmonies, Pure Gold delivers diverse sounds and musical styles with a stage presence that transcends audience ages and backgrounds. Bringing the golden age of American vocal harmony to performances from Radio City Music Hall to The Waldorf Astoria and Rock and Roll Hall of Fame, Pure Gold doo-wops their way through the decades, performing material from the 50s, 60s, and 70s, as well as a blend of blues, standards and original material to highlight their unique talents and range.

The Chantels began their journey to stardom in 1956 by a chance meeting with Richard Barrett; lead singer of the Valentines, on New York's famed Broadway. The five girls, Arlene Smith, Renee Minus, Jacqulyn Landry, Sonia Goring and Lois Harris attended St. Anthony of Padua Elementary School in the Bronx, New York, and were members of St. Anthony's church choir. Their unique sound was rooted in the liturgical music of that church, and the sounds of the boy groups that sang on the street corners of the Bronx. Barrett recorded the Chantels on George Goldner's End Record label. "He's Gone" backed by the "Plea" were released in 1957.

The next release "Maybe" became a major national hit and made the Chantels stars overnight. The Chantels began a series of nationwide tours with Alan Freed and "Murray the K" Kaufman and appeared on Dick Clark's American Bandstand.

In 1962, The Chantels released what was to become the group's highest charted record, "Look in My Eyes" and followed up with the up-tempo "Well I told you" which was a top 20 hit.

Today, The Chantels , Sonia Goring Wilson, Lois Harris Powell, Renee Minus White and Ami Ortiz, are among the most popular and requested singing groups, performing their numerous great hits.

Kid Kyle is a 24 year old Doo Wop Sensation who is currently captivating audiences with his unique voice and showmanship.

Born January 8, 1995, Kyle Flandrau was singing to his family by the time he was two years old and by the age of eight, Kyle experienced his first taste of national exposure when he appeared on American Idol Junior.

By November 2005, Kyle began to receive media exposure. An article in The Bergen Record led to appearances on NBC’S “Today in New York,” Fox’s “Good Day, New York,” and a national appearance on “The Tony Danza Show.” He filmed “My Music, Doo Wop Love Songs” for PBS in 2008, which he received national acclaim, and in 2018 he was featured on the new PBS special “Doo Wop Generations.”

Kid Kyle has performed in front of audiences, as large as 20,000 people, in the U.S. and Europe. He has extensive experience working with top musicians ranging from a five piece band to a full orchestra and his stage performance has been described as “dynamic and high energy.”

It is always a great show by this exciting young performer and one that keeps his audiences returning time and time again!

If you are an artist, maker or business representative who would like to participate as a vendor in our events, please click on the button below to indicate your interest. If your request meets our specific event requirements, we will follow up by sending you the appropriate information and registration forms.